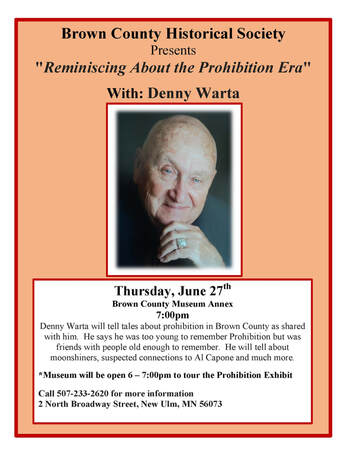 The museum will be open from 6:00 – 7:00 pm, allowing the public to view our new exhibit Wet Stills and Dry Agents: Brown County and the Prohibition Years. Beginning at 7:00 pm, Denis Warta will give a presentation on the stories of Prohibition in Brown County as shared with him. Warta was too young to remember Prohibition, but was friends with people old enough to remember.

At the turn of the 20th Century, many social reformers advocated for prohibition of alcohol through legal restrictions or total bans of alcoholic beverages. These reformers blamed alcohol for many of America’s evils and hoped that American society would be greatly improved by the elimination of alcohol.

​The 18th Amendment to the U. S. Constitution that banned the brewing, selling, and transportation of alcoholic beverages was ratified in 1919 through the efforts of these reformers. Thirteen years and eleven months after beginning, Prohibition ended with the ratification of the 21st Amendment. Contrary to the desires of the reformers, the people who opposed Prohibition did not come to accept it.
​
Wet Stills and Dry Agents: Brown County and the Prohibition Years highlights Brown County’s experiences during Prohibition, and discusses the attitudes of people in Brown County toward Prohibition, its effects on Brown County’s breweries, and the ways people ignored or bypassed the 18th Amendment. In addition, visitors will learn how Prohibition was passed in a country that made, brewed, and distilled hundreds of millions of gallons of wine, beer, and liquor.
Warta will talk about moonshiner, suspected connections to Al Capone, and much more.

The open house and lecture are free to the public. For more information, please contact the BCHS at 507-233-2620.